A Nose on the Run!

Lui: Originally written between 1835 and 1836, Nikolai Gogol's short story The Nose is an absurdist whodunit fantasia, part bureaucratic thriller, part social satire, set in the same St. Petersburg as Pushkin's 1833 Eugene Onegin. Scouring the streets of the imperial Russian capital in search of his missing nose, Gogol's noseless protagonist Kovalyov could very well have crossed paths with Pushkin's cast of aristocratic characters, if it weren't for their difference in class. For, Kovalyov is hyper-aware of the hierarchies of Petersburg society. 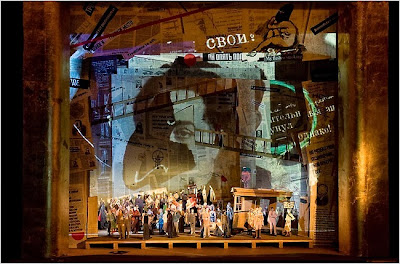 William Kentridge's signature 2010 Met production of Shostakovich's 1930 operatic adaptation moves the action of the story to the St. Petersburg of the Soviet futurists in the early twentieth century. His staging features a profusion of paroliberismo, animation and live action video projected onto mobile set pieces, scrims, screens and curtains. The stage at the Met is a whirling frenzy of activity for virtually all of the swift hour and forty-five minutes of the modernist composer's fleet-footed score. 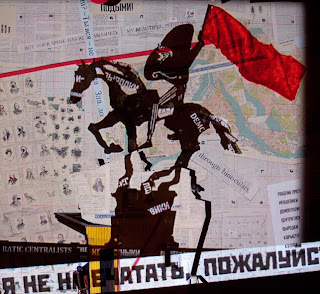 Lei: The terrific music was definitely the main character for me. The Met orchestra sounded more alive and electrified than ever under Gergiev’s lead, rendering Shostakovich’s score a pure and super-kinetic delight. I was so taken with the orchestra that I would have been content just with the music and Kentridge’s dada-futurist animations. These projections worked very well with the musical tempo and served both as part of the set and as narrative tool. The sequences where the human-size nose goes out and about, engaging in all sort of activities (from running and ballet dancing to typing and horseback riding) were just hilarious and conveyed perfectly the absurdity of the plot. 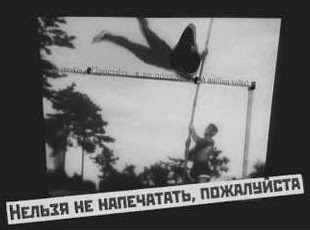 Lui: I tend to feel the same way. I could watch Kentridge's imagination riff on this material for a long time. It is so incredibly pleasurable. Still, the man at the center of the show is collegiate assessor Kovalyov (but you can call him "Major"), who is dramatically aware that the mysterious and absurd loss of his nose will doom his much desired escalation of the social ladder. In his adventures with and without his olfactory organ, Kovalyov measures himself up to everyone he encounters. He constantly scrutinizes the buttons on their uniforms, their noses, even their whiskers. When it turns out that his nose is on the loose and has somehow sprouted legs of its own and become as big as a man with a higher title than his, Kovalyov is suddenly unsure of how to address his superior. Perplexed before his nose – now State Councilor! – the Major comically struggles to convince it to resize and go back to where it belongs, on Kovalyov's face. 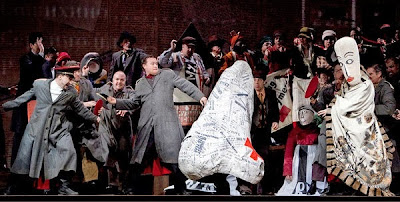 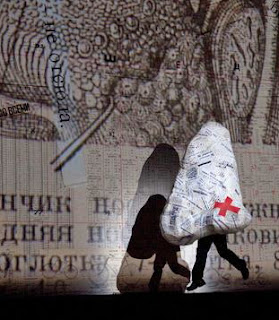 Lei: This production chose to display the confrontation between Kovalyov and his Nose as an exchange between two men, with a wobbly shadow of a nose projected onto the wall behind the higher ranked character. Rather, this should have been a confrontation between a man and his absurd overgrown nose. To me, this directorial choice missed the point entirely, especially since the big papier-mâché nose was always so effective throughout the rest of the opera. This is after all one of the key moments in the story that brings Kovalyov's complex to the fore. In the context of his bureaucratic and social insecurities, if he's talking to his nose we want to see a big nose, not a little man who sounds gracious, all too soft spoken and elegant. Also, tenor Alexander Lewis was not a convincing Nose, since he sounded too delicately high-pitched to the point of almost coming across as melancholic. I found this rendering to be at complete odds with the Nose’s character – a snob and brisk State Councilor who does not want to have anything to do with the lower-ranked Kovalyov.

Lui: Once his nose slips through his clutches, our dutiful civil servant then humorously weighs his bureaucratic options for seeking assistance in his plight – whether to file an appeal with the Board of Discipline, where the Nose now works, to take an ad out in the local newspaper or turn to the police. We are immersed in the world of protocol and arcane hierarchies. It is a satire of the corrupt inefficiencies of the bureaucratic chain of command, and it's outrageously surreal. 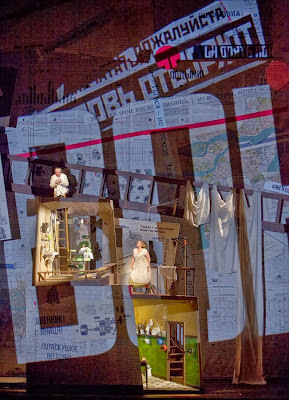 Lei: The staging conveys very vividly the dwarfing of man by the bureaucratic and social machine. In all the interior scenes (such as the barber shop, Kovalyov's apartment and the newspaper office) the action takes place in shoebox-like sets that occupy only a very small portion of the stage. The rest of the space is filled with projections of magnified newspaper articles and fast clips bursting with of all sorts of social choral situations, from crowds marching to clerks typing and audiences watching phantom shows of their own, with a terrific set-within-the-set effect.

Lui: It's rare to find an opera that so fully represents the social sphere in all its dynamic, overlapping layers. Shostakovich's score is bristling with frenetic energy and Kentridge brought it all to life. He gives us the crowds in the square, in the cathedral, in the park, at the newspaper office and in the police headquarters. Even poor Kovalyov's modest apartment is seething with social life as it is where scenes unfold with everyone from his live-in lackey, to the police commissioner, to a doctor living in the building who bursts in to make a house call. There is no privacy for our poor civil servant. 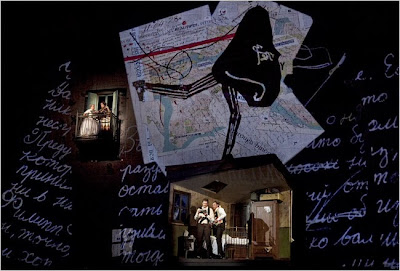 Another scene that really worked for me was the duet between Kovalyov and the mother of his some time love interest. The Major blames her for the loss of his nose and accuses her of witchcraft. The mother disregards the absurdity of the nonsensical accusation and reiterates the offer of her daughter's hand in marriage, should he still be so inclined. They exchange correspondence and sing the contents of their respective letters, one superimposed directly onto the other. Rather than achieving communicative clarity, the effect is a confusing hodgepodge of two people talking at and over one another. It is a piece of virtuosic genius the solution the composer comes up with to represent the social economy of their epistolary-marital commerce. Rather than give us the direct courting of the love interest through a seductive aria or a lovey-dovey duet, Shostakovich gives us a pushy mediator and turns the pseudo-love story into yet another negotiation straight from the sphere of the social.

Lei: The opera has lot of Russian recitatif, which was often quite funny given the absurdity of the story and the wittiness of the libretto; also, the subtitles were projected onto the set, sometimes even as part of the animations, which made the business of following the Russian fun and easy. Even so, after a while all the talking got a bit tiresome and I just craved some melody. 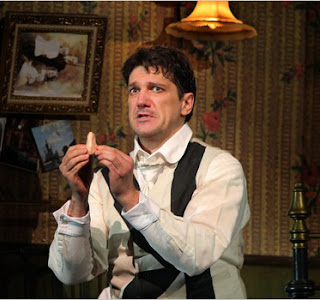 When it came to real singing, baritone Paulo Szot did a good job as Major Kovalyov, sounding powerful enough and displaying the comic vein required of the role. I also liked the musicality of Sergey Skorokhodov as the Major’s servant Ivan, who provided a rare moment of palpable emotion when he cozied up with a balalaika singing a simple folk ditty, showing the musical eclecticism of the visionary breadth of this opera. Barbara Dever as Mme. Podtochina and Ying Fang as her daughter brought some (at least for me) much-needed female melody to the piece, it was a relief to hear some soprano trilling after the prevailing manly Russian declamations. I was not particularly impressed by the rest of the singers, who many times were just so dwarfed by the music that it was just hard to hear them.


Lui: As one of the most experimental stagings that I've seen at the Met, it made me nostalgic for the kinds of cutting-edge productions NYC Opera has brought is over the last couple of years. Seeing The Nose made more poignant the imminent loss of the institution that brought us, for example, that visionary Moses in Egypt last year that won't soon be forgotten. Along with Satyagraha, The Nose ranks up there with the most unique operatic spectacles that I have experienced at the Met.

Lei: I am not sure The Nose it’s my piece of operatic cake, however I enjoyed it as an entertaining absurd futurist piece. And I very much look forward to seeing more Kentridge-like productions around. 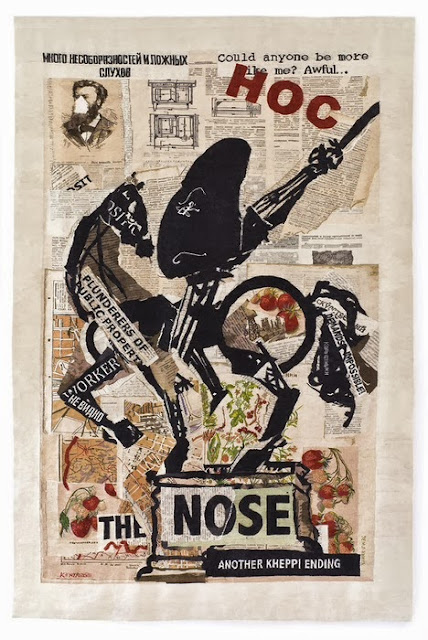 Posted by Zerlinetta at Saturday, October 12, 2013