David Lang’s The Loser
2016 Next Wave Festival
BAM Howard Gilman Opera House
September 7, 2016
Lei: A handsome man with slicked back blond hair, donning a crisp tuxedo and a slightly arrogant, sardonic grin ascends a platform some twenty feet in the air above the orchestra seating.  The man starts what will be an hour-long uninterrupted monologue accompanied by 5 instruments that can be summarized as follows: “My friend and I were studying piano with Horowitz in Salzburg and thought we were going to be the best virtuosos in the world, then Glenn Gould arrived to attend piano classes with us and we realized we would never make it because he was so good. Since I could not be the best piano virtuoso, I decided to become a philosopher instead and give away my piano to a 9 year-old who would destroy it in the shortest time possible. My friend also gave up piano and took up writing and ultimately committed suicide by hanging himself in front of his sister’s home to spite her. Glenn Gould died by a heart attack while playing the Goldberg Variations. Even in death Glenn is the victor and we are the failures.” 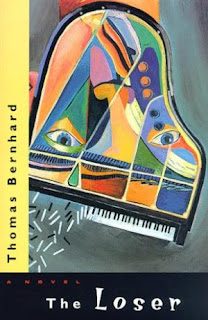 Lui: This is David Lang’s word for word adaptation of several passages from Thomas Bernhard’s novel The Loser, a vocal performance for solo voice baritone, double bass, viola, cello, percussion and, of course, piano. The music very tastefully buoyed the vocal performance and never jockeyed for weirdness or overpowered the voice. Rather, the musical accompaniment only added color to the sung through prose of the narration. Much of Bernhard’s text (in translation) is featured untouched: at no point did Lang feel the need to turn any of it into song or add a ritornello, just the basso ostinato of the constantly recurring utterance “I thought,” which repeats with the same frequency in the prose of the novel as well.

Lei: The whole monologue was all intact sung right through, and the delivery by baritone Rod Gilfry was crystal clear. Mr. Gilfry did a good job teasing out some of the unsettling underlying monstrosity of the character, which is pervasive and infectious in the novel. He was particularly commanding in a handful of sudden outbursts of intensity that enhanced key dramatic points in the narrative and also sent chills down my spine. Having seen this singer before as a demonic Don Alfonso in Alden’s dark Cosi for NYC Opera back in 2012 only heightened my perception of his performance here, as his character in The Loser is equally dark and twisted. Yet the negativity of the role as delivered by Mr. Gilfry was unequivocally enticing. There was something about his rendition of the loathsome character that made you kind of like him or at least not entirely hate him. He embodied the arrogant, smooth jerk that women cannot help but fall for even if they know he’s trouble. And trouble is an euphemism here, as the guy is elegantly perverse, excessively introverted, sadistically cruel and with a complex of superiority that is really of inferiority. Still, one cannot help but being hypnotically attracted by him.

Lui: The performance worked really well in this particular take on something that was written for an operatic voice though did not constitute what typically passes as opera. The Loser is a uniquely satisfying piece of experimental modern operatic music. More like a character study or a piece of vocal acting. We’ve seen modern operas in which singers are given awkwardly ridiculous lines to sing, sorry excuses for poetry. Here there was no attempt to elevate any of it to poetry. Nor for that matter to impose traditional operatic cadences nor to abstract out the syllables of words for uncertain purposes. It was truly a baritonal monologue elevated to a sort of Viennese elegance and style, which perfectly suited the dark slightly perverse Austrian nature of the unnamed character. His declamation of the text bore the right amount of embellishment and self-important confidence to give it all the right classy old world spunk.

Lei: The audience was limited to the mezzanine, and it was packed. The run seems to be completely sold out though most of the cavernous space of the Howard Gilman Opera House sat empty. It was a very unique use of the grand space, shrouded in darkness. The booming of the voice in the center of the space, literally, suspended some twenty feet in the air, and the audience limited to just one rather claustrophobic section halfway up, lent an air of intimacy to the space that I have come to expect from shows at the Harvey but not in the big house. In this respect it was unlike anything I have experienced.

Posted by Zerlinetta at Wednesday, September 21, 2016