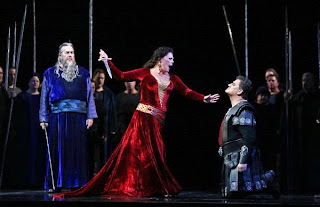 Lui: Loosely following the main plot lines of the Medea, Norma transcends her source material in the most redeeming ways, mainly because she decides to spare her children and face her own death, which is what makes Norma a character of truly heroic dimensions. The emotional range of her role runs the gamut. She exudes the fortitude of an astute political and military strategist in "Sediziose voci"; the mystic melancholy of a powerful priestess in "Casta diva"; the all-too-human sadness of regret in "Oh! Rimembranza!"; the ability to forgive and forget in the name of feminine friendship in "Deh, con te, con te li prendi"; the sincere mercy of a truly loving mother in "Dormono entrambi"; and the violent conviction of a warrior in "Dammi quel ferro."


And so, Norma is a more heroic representation of a powerful female figure than Medea, albeit also an extremely tragic one. Both women go out in a blaze of glory. Having leveled her revenge and killed her children, the king and his daughter along the way, Medea takes her triumphant leave: a holy terror on Helios' flying chariot led by dragons. Having spared her children and owned up to her hypocrisy, Norma goes to meet her death triumphantly – a "sublime donna" with her sins redeemed and her integrity intact.
Lei: Operatic drama hardly gets more multi-layered than this. If one adds to that Bellini’s lively bel canto score dripping with with romantic passion and one of the most beautiful and challenging soprano "assoluta" roles ever written, it is surprising that Norma is not performed more often. This season there are only 6 fully staged productions of Norma being performed worldwide (New York Met, Knoxville, Paris, Toulon, Chemintz and Dusseldorf) and 3 concert performances (Lyon, Vienna and Budapest). If one does the same search with Traviata the results are over 50 (source: Opera Critic Search Suite). And that's not just because Traviata is standard repertoire and an all time public favorite, it's mostly that if one does not have a soprano capable of tackling the lead role, it just does not make sense to stage Norma at all. 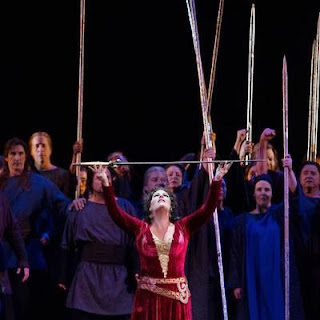 Sondra Radvanovsky was impressive. The moment she started singing the air was transformed, not only because she was so powerful one could literally feel the air vibrating (even in family circle) but mostly because the sheer purity of the sound of her voice and her mastery of the technique and breadth of range required for this role were terrific. I saw Radvanovsky a couple of times before, in Trovatore and Ballo in Maschera and back then I thought she was technically very solid but lacked that extra warmth and sweetness to convey the emotional depth of her characters. That was not always the case in Norma, though I generally felt she was pretty composed and could maybe have unleashed some more emotion. I will be interested to see how she evolves in this role since she clearly showed she has the technique to carry it – and that, in itself, is a rarity.
Lui: Indeed, technically proficient but not enough emotion, however, I found myself transported by the power of this strong female lead. And Radvanovsky owned it. Her voice swooping and diving over the low droning chorus in "Casta diva" cast its spell on me. In my opinion she was in full possession of the stately solemnity of the role. More emotion would only help to round out what is such a refreshing female character. And Radvanovsky embodied all of Norma's transcendent strong feminine qualities with grace and self-assurance. I found her to be a thrill even with the stiffness and paucity of her emotional release. 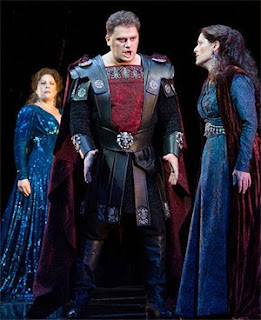 Lei: Other singers did a fine job. I had mixed feelings about the tenor Aleksandrs Antonenko as Pollione, he went flat a couple of times in the first act but then got better and sang with warmth and a well rounded articulation, even if not that powerful. Kate Aldrich’s Adalgisa was not bad and her duets with Norma were lovely though next to Radvanovsky everybody else sounded pretty weak.
Lui: Though Radvanovsky carried the two spectacular duets between Norma and Adalgisa, these were, nevertheless, among the few moments in which Kate Aldrich as Adalgisa really shined. Their first duet, "Oh! Rimembranza!," is a tender moment of understanding and empathy that really highlights the feminine friendship and comraderie that lies at the center of the story. The musical texture of their interaction is rich and varied. Their voices rise and fall and break up into little staccato phrases, surging together and then apart. Dangling, a capella, out in the void, they sound both vulnerable but also intransigent, drawing strength off of one another. Little do they know at this point that they are both infatuated with the same man. In her earlier appearances in Act 1, singing on her own, I was less convinced by Aldrich's Adalgisa. If character is communicated through music and especially singing in opera, she did not seem to have the strength or the stature to be a believable contender for Pollione's affection opposite the sheer dynamism of Radvanovsky's Norma. It was just unclear what her Adalgisa had to offer that Norma was lacking. 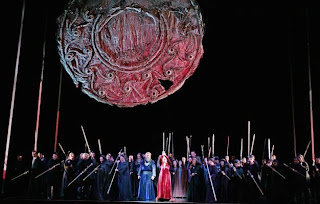 Lei: Staging was some odd combination of sleek modern black walls and floors with a few ancient looking stone elements, such as the platform for the religious rites, the back wall of Norma's house and a giant disc with Druid-like decorations that descends from the ceiling when Norma unleashes the army in "Guerra, guerra!". The sets were not particularly visually engaging, other than a big moon changing shape and color in the background that reminded me of James Turrell's Aten Reign installation recently at the Guggenheim. True that the singing was all in all quite good and staging is secondary when that's the case, however this production could really benefit from some extra bright touches, it's very dark and even the costumes (except for Norma's blue and red outfits) are all pretty somber and almost disappear into the black sets. At a minimum, the Druids could use some white tunics so that the chorus appearance can match its musical liveliness and Adalgisa should definitely get rid of those old maid rags and wear some livelier color to emphasize the youth (and sluttiness) of her character.
Lui: John Copley's no frills production was a stark outing. Largely shrouded in darkness, the staging and set does little to distract from the music, and thank goodness because the singing in an opera like this one truly deserves to be the the main attraction. It does not matter much where you set the opera. Give me good singing and you can do whatever you want with the staging.

Posted by Zerlinetta at Wednesday, October 30, 2013