Stepping into Carnegie Hall for Handel’s Alcina recital starring Joyce DiDonato in the title role, I couldn’t help but think about Mariella Devia’s Roberto Devereux we saw here back in May. It turns out that the two shows had more in common than just the venue: in both cases a world class singer - a “queen” in her field - delivered a stellar performance bringing the house down and making the rest of the cast look and sound like pale mono-dimensional bystanders. I was also surprised by just how much the two characters have in common, as both Alcina and Elisabetta sing their way through a veritable roller coaster of emotions, where the main tension is between the vulnerability and tenderness of a powerful woman in love and the terrifying wrath the same woman can unleash when betrayed. Alcina is a sorceress who conjures underworld spirits and has a Circe-esque reputation for transforming her ex-lovers and rivals into wild beasts, while Elisabetta is a queen leading armies and signing death sentences, but at the end of the day their dramatic complexity is very much alike. Who knew that Donizettian crazed queens and other “assoluta” roles had such clear-cut precursors in baroque powerful leading ladies.

DiDonato, sporting a counter-intuitively glamorous mohawk and a witchy Vivienne Westwood gown, embodied the many emotional nuances of Alcina brilliantly. Her vocal agility, expressivity and sheer power behind her precision are simply exhilarating. In her opening aria Di’, cor mio, quanto t’amai where she reminisces about her first encounter with Ruggiero she sang pure and tender love, with a touch of nostalgia. Like Elisabetta in Devereux, after an initial lovey dovey moment, Alcina’s emotional temperature rises quickly at the first suspicion of betrayal from her lover: in Sì, son quella, / non più bella, / non più cara / agli occhi tuoi, the sorceress becomes manipulative as she tries to lure Ruggiero back into her embrace. DiDonato delivered this aria with a beautiful purity of sound, which was rendered all the more heart wrenching by the spare accompaniment of a lone cello that only served to heighten its menacing edge.

Alcina’s fury fully explodes in Act II once she realizes that Ruggiero is indeed slipping away from her, after consternation (Ah! mio cor! schernito sei!), awareness of her power kicks in (Ma, che fa gemendo Alcina? / Son reina, è tempo ancora), and DiDonato here switched from wailing despair to fierce vengefulness with such force that I could hear the air vibrate (and we had gallery tickets). The sorceress then insults Ruggiero a bit more (though not as colorfully as in her Donizettian counterpart), and proceeds to scarily invoke underworld spirits (Del pallido Acheronte spiriti abitatori, / e della notte ministri di vendetta, / cieche figlie crudeli, a me venite!) to cast another spell and retain her lover. Interestingly, Alcina’s magic wand does not work and her demise begins. However, she does not go down without a bang: in the raging and fiery Ma quando tornerai / di lacci avvinto il piè, / attendi pur da me / rigore e crudeltà, she warns Ruggiero of her revenge once he’ll inevitably crawl back to her. Here DiDonato was all fireworks, perhaps also because she has been singing this particular aria in steady rotation since it was featured on her Drama Queens album and tour last year.

The sorceress ultimately acknowledges her fate of loveless powerlessness in her final aria, Mi restano le lagrime, that exudes frailty, melancholy and, ultimately, humanness. This is where Alcina differs from Elisabetta: in Handel, when the supernatural enchantress falls in love she loses her power and her magic reign crumbles, while in Donizetti things are a bit more complex (the queen uses her royal will to cause the beheading of Roberto, and loses her desire to reign as a result).

Alcina’s character is so fascinating and her music is so good, particularly when performed so sensationally by DiDonato, that I kept hoping she had more arias to shine in. Unfortunately the rest of the cast was just not up to the level of the leading lady, with a couple of exceptions: mezzo Alice Coote as Ruggiero had some very nice expressive moments (though she never managed to play the Carnegie space as well as Joyce) and soprano Anna Devin as Oberto, while having a miniscule role, really matched Alcina’s fury in Barbara! with an exhilarating tirade of insults and threats.

I found the rest of the cast to be on the bland side: soprano Anna Christy as Alcina’s sister Morgana had a charming chirping presence, but her higher registry was on the strident side, mezzo Christine Rice (Bradamante) was just not incisive enough, tenor Ben Johnson (Oronte) lacked airiness and bass Wojtek Gierlach (Melisso) did ground the opera with some manly tones but came across a bit muddled. 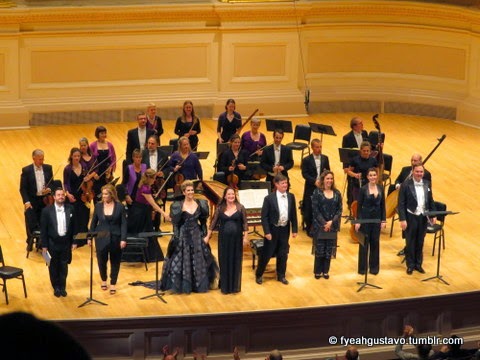 The English Concert lead by Harry Bickert, however, was a force to be reckoned with. They were truly magnificent both as an ensemble and in a couple of showstopper solos by cellist Joseph Crouch and first violinist Nadja Zwiener. Today I was reminded of how amazing baroque opera can be and I left longing for more of it to be performed in fully staged settings. Particularly if, like Alcina, the libretto offers up so many fantastical elements for a visionary director willing to play with them. 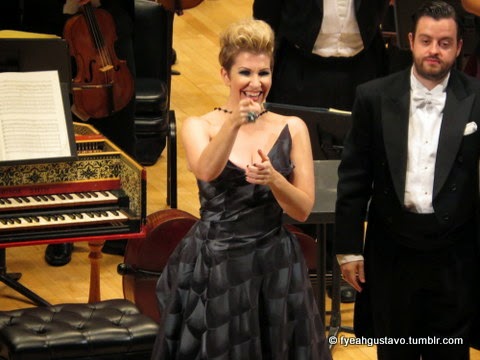 Posted by Zerlinetta at Thursday, October 30, 2014