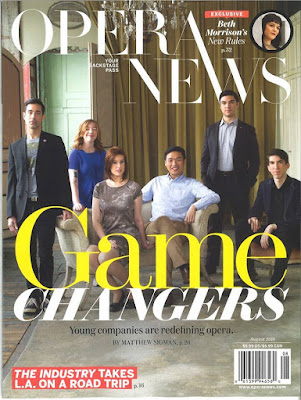 The August cover of Opera News features “Game Changers: Young Companies Are Redefining Opera.” With such a sexy title one would expect that the magazine would give long overdue attention to the booming phenomenon of independent operas exploding all over New York City. However, the relevant article by Matthew Sigman focused exclusively on three companies: Venture Opera, Utopia Opera and Rhymes With Opera (RWO). Which in and it of itself is a wonderful thing, if it were not for the overall vapid, condescending tone and (lack of) content of the piece. As an avid and active follower of the indie opera scene in NYC, such lack of depth and, ultimately, respect, made my blood boil many times over.

The author of the “Game Changers” article provides virtually zero specific information, appreciation or evaluation of the actual works produced by these companies. By reading his piece, all we learn about Venture Opera’s work is that it “recently presented Carmen at the Diamond Horseshoe, the showman Billy Rose’s former nightclub.” When it comes to Utopia Opera, we get more venue information, and are told that the company performs “at the Ida K. Lang Recital Hall, at Hunter College [...] without wing, fly or depth space, let alone a proscenium – but which, [the founder and director] Remmers said, can be transformed into a fully theatrical experience.” When it comes to RWO, there is a touch of detail: “productions have emphasized projections and puppetry as much as people.” That’s it. All this got me thinking that maybe the author did not actually experience any opera produced by these companies, in which case he probably should not be writing about them.

Mr. Sigman did, however, spend considerable time harping on how these organizations are Manhattan-centric and run by traditional-looking individuals. And I quote: “Artistic headquarters for these companies are in Manhattan. Whereas hipster Brooklyn, with its “lumbersexual” culture, is the incubator of the avant-garde – and home of the particularly successful LoftOpera – the artistic locus for Utopia, Venture and RWO remains the island of Manhattan. (For the record, none of these clean-shaven, well-groomed interviewees arrived on a skateboard. No tattoos or piercings were readily apparent).” For the record: in the picture on the front cover, RWO’s composer, Ms. Fulton, sports a rather large tattoo on her upper right arm. And in any event, who the hell cares where a company is based and how respectable its artists appear? Is this supposed to reassure Manhattan geriatric audiences that this sacred art form is not being taken over by a radical mob? Why don’t we focus instead on the artistic quality of the actual work product of a company and judge by its track record instead?

I have the utmost respect and admiration for each and every independent opera company out there keeping the art form alive and breaking with stuffy conventions. Their work is relevant and often high quality and thought-provoking. We know well the work of one of the companies mentioned, Venture Opera, and their inaugural production of Don Giovanni in a Lower East Side synagogue was indeed among the most exciting things we’ve seen this year. It felt like stepping into an exclusive and slightly blasphemous nightclub, á la Eyes Wide Shut, singers were top notch, the concept was sexy and irreverent (Don Giovanni as a renegade Catholic priest, surely with tattoos) and the experience felt very much immersive. Their second show, Carmen, despite having a stellar lead singer, did not come across as polished and ground-breaking as their Mozart (arguably because of some last minute venue changes) but was nevertheless successful in conveying the themes of Bizet’s blockbuster in intimate and inventive ways. Rumors are that they may be producing a Gianni Schicchi in September, which we’ll be sure to check out.

If, as the Opera News article claims, we want to talk about companies that “create innovative new works, reinvent classic repertoire, explore unusual venues and reach audiences outside the mainstream,” then many more worthy companies should also be showcased and celebrated. Regardless of where they are based, where they perform and how their founders look like, these companies have a proven track record of hip, ambitious and visionary productions.

If we’re really talking about game changing independent opera, we cannot ignore a company like LoftOpera. Yes, they’re based in Brooklyn. Yes, they may have tattoos. Yes, the public sits on the floor and drinks free beer during the show. Yes, they perform in raw lofts in the middle of nowhere. But only at their shows have I witnessed the magic of a twenty-something catching an opera for the first time and being actually transfixed and moved and enthused by it. Which, by the way, is the effect that opera, when it’s good, should have. The public here gasps when Lucrezia Borgia poisons her own son, cheers wildly when Tosca kills Scarpia, laughs out loud at the threesome in Comte Ory. With shows that are unassuming yet of outstanding artistic quality, LoftOpera is the only company out there able to plan an actual season spanning the whole year (with subscriptions) and luring a public that may not have seen an opera before, but becomes hooked and keeps coming back since 2013. And, by the way, none of their shows so far was “avant garde” or had any hints of “regietheatre” for that matter. Other than updating a bit the costumes, all their productions have been pretty straight and respectful of the librettos. Still, they manage to lure hundreds of under-thirty, so they must be doing something right. Next up is their take of Mozart’s Cosí Fan Tutte in September.

Heartbeat Opera is a younger company yet with an exquisite directorial take and utmost respect for musical values. Founded by two Yale School of Drama alumns, Louisa Proske and Ethan Heard, Heartbeat’s register runs the gamut, from baroque recitals in drag (in Brooklyn!) to bel canto masterpieces to Kurtag’s one-act operas. Equally comfortable with comic mischief and the deeply dramatic, Heartbeat Opera recently gambled and won by producing a chamber version of Lucia di Lammermoor, with only 6 singers and 6 musicians (and yes, at some point a toy piano was played). It may sound sacrilegious, but it was the most mesmerizing, thought provoking and intense Lucia I’ve ever seen, with Heartbeat really distilling the Donizetti staple to its most visceral and powerful essence. Next up are a renegade opera-cabaret show on the High Line on September 22 and drag benefit by the intriguing name of “Queens of the Night: Mozart in Space” (maybe aerialists will be involved?) on October 31.

OnSite Opera is another innovative and creative company out there. Every one of their shows is produced in a site-specific spectacular venue. From a mansion in the Upper East Side (Paisiello’s Barbiere) to Madame Tussaud’s Wax Museum (Rameau’s Pygmalion) to a West Village hidden villa (Portugal’s Figaro), OnSite strives to use unconventional spaces to curate intimate and high quality operatic experiences. Next up is a double bill on September 29-30: Argento’s Miss Havisham and Berlioz’s La Mort de Cléopâtre.

Loft, Heartbeat and Onsite, though, are just the tip of the iceberg. Let us not forget the myriad other companies bursting into the NYC indie scene. To name a few:
Hopefully all this will give Opera News some pointers as to where to find indie opera in NYC and a sense of how exciting it is – in any of the five boroughs and with or without tattoos.